This garden in a beautiful grade 2 listed house in a conservation area of Oval in London was having a complete make over.  The clients were planning a significant refit and restoration of their house and wanted to modernise  their garden at the same time.  They wanted the garden to be a social area to entertain friends and family as well as a garden where they could sit quietly and relax in.   They were having a new kitchen extension built with bifold doors onto the outside space and were keen for the garden to feel like an integrated part of the house.  The recent addition of Oscar the puppy meant that a lawn would be essential for safe runarounds.

The existing garden was an interesting but cluttered ‘L’ shape with lots of old garden artefacts and dense, out moded, areas of planting.  It was surrounded by strong built form with significant open sky views too.  The challenge was to do something interesting and dynamic with the space that reflected the refurbishment plans  and clients aspirations.

Elaine proposed to open the garden right up with a series of slightly offset interfacing oval forms to create interesting and varied views from within the proposed kitchen extension as well as across the garden.   There is a patio and separate seating areas and social spaces,  lawns to lie on or for children (and puppies!) to run around, utility areas for storage and planting to surround the whole area.  The curved form in a predominantly square context is a bold decision but it will integrate the potentially awkward ‘L’ formation with a less rigid and more contemporary form than the typically adopted square paving solution.  The hard materials were specified to harmonise with the colours and materials used in the refurbished house.  The planting has different character areas in response to the different spaces within the garden as well as available sunlight but with echoes and repetitions across the beds for visual continuity, lots of foliage texture and a subtle palet of green with accents of vivid colour and long seasonal interest.

It was great to watch the garden emerge from the clutter and debris and for it to look so much bigger once it was cleared and opened up.

After just two months the garden was unrecognisable.  All of the plants grew on well to create a lush and fast establishing scheme.

We had purchased a house which we planned to completely renovate and also to extend in order to make better use of a fairly large corner-plot garden.  The previous elderly owners were green-fingered but the garden was not to our taste and was in need of a complete redesign given the new footprint of the house.

Neither myself nor my partner knew a great deal about how a project goes from design to build to execution and then to maintenance.  We had some ideas of what the look was we wanted but other than that, we needed someone to take us in hand and guide us through the process.

Thankfully, Elaine was there to help us.  With many issues around the design and renovation of the house taking priority, we were able to quickly describe our goal to Elaine using pictures from books of hers, design ideas and suggestions as to what we may or may not like in terms of the overall look.  Armed with this information, Elaine came up with a range of four or five ideas from which we chose one to be designed in more detail.

Once we had a good idea of what we wanted, a builder was assigned to the job and a more detailed species list put together that would create the sort of texture and colour we wanted – lush greenery with accents of colour … relatively low maintenance … comfortable and beautiful but not too groomed.  As first-time garden owners, Elaine also brought our attention other things that we had not thought about such as the aspect of the garden, lighting, drainage and utility space.

We are absolutely delighted with the end result – it’s a truly fantastic garden that we are going to enjoy watching as it develops.  We can’t recommend Elaine enough. 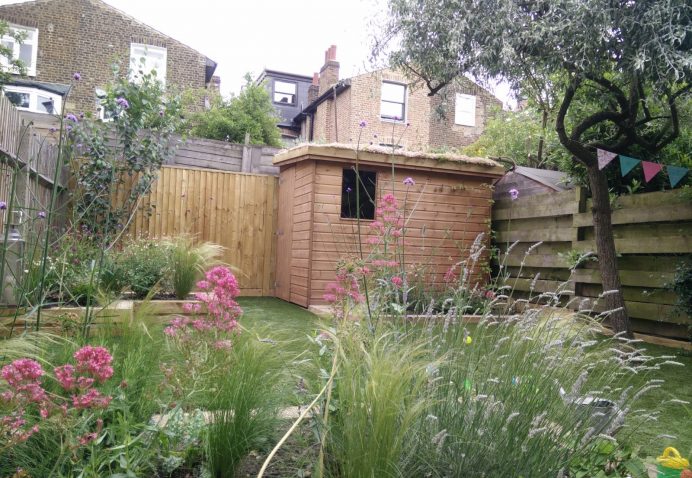