Elaine has designed and supervised the build of several demonstration gardens. These require horticultural knowledge, an understanding of modular and well timed construction techniques as well as a pinch of theatrical flair.

Whilst working at London Wildlife Trust Elaine designed and built a demonstration show garden called ‘The Life Cycle Garden’ for the Small Sustainable Gardens category at the RHS Hampton Court Flower Show. The main concept of the garden was to celebrate the essential cycles of life and death that are necessary within a healthy and diverse garden ecology contained within a well designed and functional garden space.

The form of the design itself was circular and all of the features related to the cyclical concept in some way.  These included a spiral sleeper path that literally decayed and crumbled along its journey, a decaying log pile wall, dead and living hedges with windows, a bench made out of a living flowering lawn, a spiralling and distorting recycled copper pipe trellis which was also a light feature over the tree trunk ‘living herb’ table and seats, a new shed with living roof made out of recycled scaffolding planks with a water butt made out of old drums and fed into a small, almost hidden, pond.  A series of planting groups for wet and dry shade, bog loving and sun loving plants enveloped the space.

RHS garden shows are theatrical events and competing gardens must be immaculate but look well established and realistic. There is only two weeks to build the gardens in situ and they should ideally be finished well in advance of that to allow the plants to bed in. With this in mind as much of the garden as possible was prepared and built in advance. It would not have been possible without the dedicated and hard working team of volunteers.

Elaine and her team were delighted that the garden was awarded a much coveted RHS Gold Medal as well as by how well received it was by visitors to the show.

The ‘Life Cycle Garden’ was carefully dismantled, stored and then rebuilt just a few weeks later on the terrace of the Royal Festival Hall, RFH, in London’s South Bank Centre for “Pestival”, an international festival across the whole of The South Bank that celebrated insects. Delivering and then maneuvering several tonnes of soil, plants and the garden features by service lift and crane to the first floor of the Festival Hall during business hours was highly challenging but rewarding work. A timber frame was built to contain the garden as there was no soil to dig down into.

The brief from the client, Thames Water, was to design and build a temporary demonstration drought tolerant garden in Trafalgar Square as part of a one day summer festival hosted by the Greater London Authority, GLA. The garden had to be constructed in just one day in Trafalgar Square so Elaine designed it to be built in advance and in sections for a fast compilation on site. The garden had minimum “fill” to reduce the weight on the heritage stones in Trafalgar Square as well as to reduce cost, on site construction time and post festival clean-up time.  Minimum fill meant a series of shelves within the frame to hold the depth of the various features. 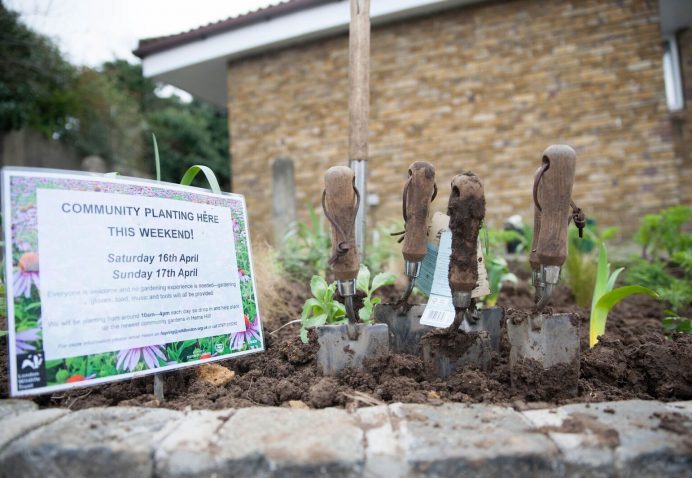 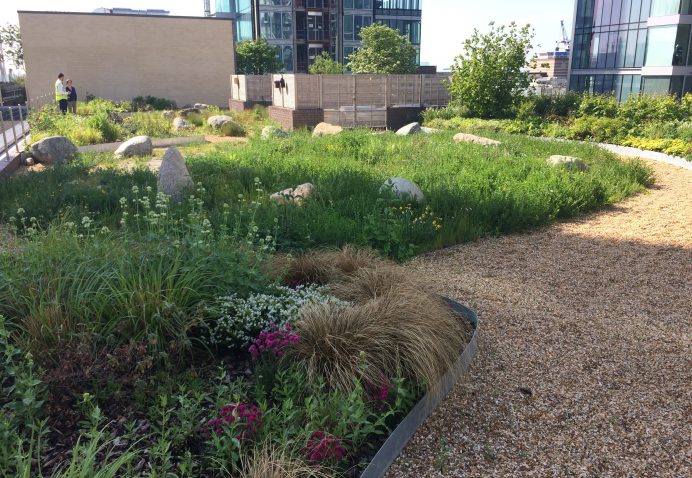